With the assembly and transport system from KNOLL Maschinenbau, Hörmann Automotive Penzberg was able to reduce the space required for truck cross member assembly to approximately one-quarter of what was previously required. The time required was reduced by approximately 50 percent. In addition to the conversion to line production, integrated process control technology provided by KNOLL made a significant contribution to this. 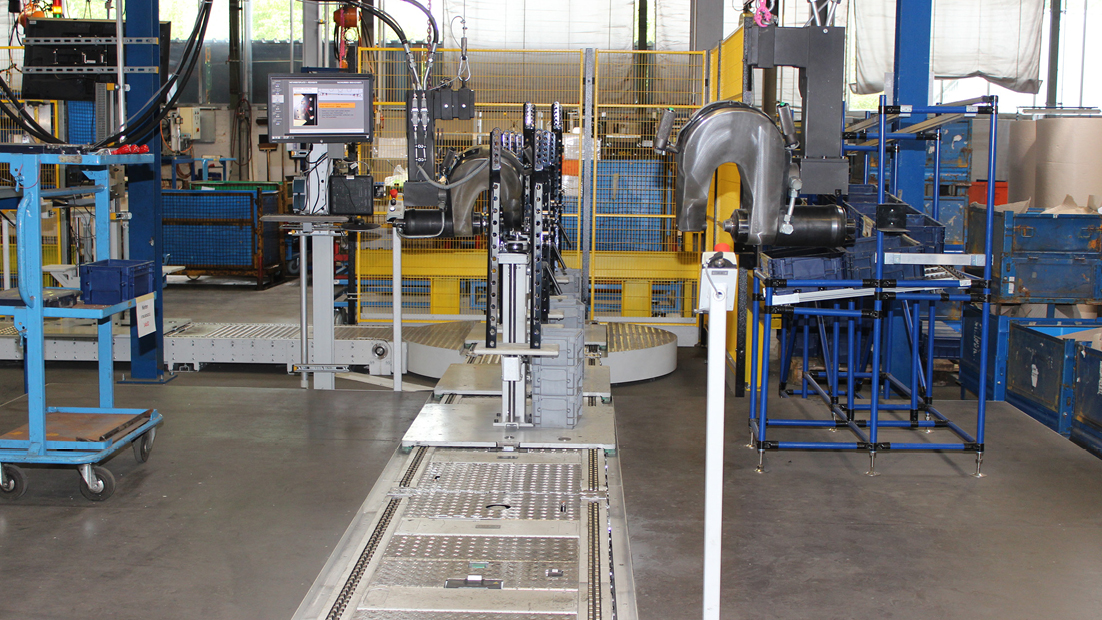 Hörmann Automotive Penzberg GmbH (HAP) is a popular partner to the vehicle industry. In particular, manufacturers of commercial vehicles and agricultural machines take advantage of this Upper Bavarian service provider's expertise and decades of experience. Hörmann Automotive emerged from the MAN omnibus plant in Penzberg and today specializes in the processing of sheet metal pieces and pipes.

Approximately 700 employees process about 90 tonnes of sheet metal in various thicknesses and formats and 10,000 meters of pipe material every day in three-shift operation State-of-the-art laser and robot welding systems and pipe bending machines produce nearly 40,000 components and systems day in and day out. First and foremost, these are ready-to-install frame attachment parts, which are produced entirely in Penzberg, proceeding from raw material to coating to assembly. However, the company's expertise extends beyond this, as Alexander Herz, Department Manager for Logistics, explains: "We provide our customers with the desired products just-in-time or just-in-sequence – with the greatest reliability and flexibility."

In order to be able to act quickly and appropriately for the assembly of truck cross members, Hörmann Automotive Penzberg invested in an assembly and transport system from KNOLL Maschinenbau, Bad Saulgau. The new system enabled a conversion from box to line production. According to Alexander Herz, the earlier process required "too many individual steps with great handling effort. Furthermore, box production was too space-intensive, since after production and assembly a sequencing of the parts was still necessary."

The background: HAP provides its customers with truck cross members in three basic variants: cast, welded, and riveted – in different versions depending on the vehicle. Delivery is made "just-in-sequence." This means that the cross members must be packaged in special transport containers in precisely the sequence required so that the customer can take them over into production without further sorting.

Most of the cross members to be riveted are conveyed on the new assembly belt, where they are produced up to as-delivered condition. The cast and welded variants, which do not require additional processing and assembly, are added at the belt end. "The process control technology provided with the KNOLL assembly system handles the sequencing of all cross members. The required sequence is displayed on a large monitor, so that an employee can fill the transport boxes accordingly. This has significantly reduced the effort required for sequencing," rejoices Logistics Manager Herz.

The transport system used by HAP was originally developed by KNOLL for its in-house needs for assembling filter systems. Motivated by its internal success, KNOLL has been selling the system as an independent product for a few years now.

Depending on the requirements, there are three different conveyor belts available: the TS-S accumulation roller, the TS-G belt that builds on a straight-lug chain, and the TS-Z underfloor chain. KNOLL also offers an extensive line of equipment, from carriage systems to adjustable stoppers to turning stations; indexing units, and height-adjustable and rotating scissor lift tables to individual housings. Thanks to the consistently modular layout, which includes the mechanical and electronic elements as well as bus systems, the transport system can be configured in almost any size and shape.

Persuasive when it comes to price and performance

The attention of the people in charge at HAG was first drawn to the KNOLL assembly and transport system at the trade show Motek 2012. The KNOLL TS emerged as the victor after a subsequent benchmark with other suppliers' systems. "Decisive were the modularity and expandability of the system," explains Alexander Herz. "And KNOLL's offerings, which meant that we could get the system and process control technology from a single source, was a big plus for us. In addition, the price/performance ratio was right."

Thus KNOLL received the order at the end of 2013 to plan the assembly system for the truck cross members to be riveted. Andreas Fuchs, Shift Manager for Assembly and Painting, describes the cooperation as markedly constructive and expert: "KNOLL introduced ideas to complement our ideas; this represented clear added value for us. For example, the workplace design with wooden pedestals, which even out the height of the belt. This additional feature makes the system much more ergonomic and has been received enthusiastically by our employees."

The transport system was installed in Penzberg in fall 2014. It consists of a space-saving, rectangular arrangement of conveyor belts and different workstations. The transport system with accumulation roller (TS-S) is used for the straight stretches; the four turning stations at the corners feature a belt with a straight-lug chain (TS-G). The belts have a track width of 800 mm and they are 230 mm high.

The workpiece carriers consist of transport plates, which generally remain on the belt system. They have RFID tags, which are inscribed with the order number at the first station. These identify the component to be loaded and the tasks to be performed. At each of the following workstations, the RFID tag is read out and the respective order or tasks are called up by the installed process control system.

The second station is the so-called "supermarket." Here the assembly stand on the workpiece carrier is fitted with all required parts. Then the carriage moves on to two adjacent processing stations where the cross member is riveted using large riveting tongs, once on the right and once on the left.

Next comes quality assurance. At this station, there is a visual 100% check, which is currently still performed by an employee. At the start of 2016, a robot-assisted measurement station will be installed, one that is equipped with a camera system. Danny Zinßler, a member of the KNOLL planning team, adds: "We will complete the conveyor belt with the already-installed lift-indexing unit, which lifts the workpiece carrier and using indexing bolts, puts it in a defined, repeatable position. While currently the employee must still acknowledge the I/O status with an acknowledge button, release will then be automatic thanks to the communication between the measurement cell and the controller."

If an error is found, the workpiece carrier will go back to a reworking station. Meanwhile, the sequence stops in order to prevent an incorrect sequencing. Only once the cross member is properly assembled does it move on to the removal station, where the employee packs it in the transport container in the proper sequence. There, the RFID is also reset to zero so that the workpiece carrier is available for recirculation.

Absolutely mandatory for the precise sequence control is the RFID identification system, which KNOLL offers as a standard module. It also provides additional information to employees. Thus a monitor is installed at each workstation; on it, the associated production order appears after identification of the workpiece carrier, and individually-configurable, graphic information can be called up there. Shift Manager Andreas Fuchs explains: "In addition to text, we make photos, drawings, and 3D models available to the employee; he can use these to glean the required information easily. Thanks to RFID identification and the process control system, we also have the assurance that the operator will not accidentally receive an incorrect order."

The main savings due to the new system are of space and time. Alexander Herz sums things up: "We succeeded in reducing the space requirement for the entire product family to one-quarter of what was required before. In addition, we were able to reduce our inventories by nearly 50%. This was a huge achievement since we can now use the freed-up space for other types of production. And the time and reaction factors are considerable as well. Today we complete the same production program in one and one-half shifts whereas previously we needed three shifts."

Now Logistics Manager Herz is focusing on completely utilizing the capacities of the assembly and transport system and filling up the one and one-half free shifts: "Our goal is to be able to produce additional assembly components in several steps on the belt," explains Alexander Herz. "The conversion measures for this are clear," adds Danny Zinßler. "For in the end, the layout of the KNOLL TS transport system is modular, so that it can be expanded at any time and without great effort."

Hörmann Automotive Penzberg GmbH (HAP) produces primarily high-quality components and systems of metal for commercial vehicles and agricultural machines. Its most important customers include MAN, Daimler, Scania, F.X.z Meiller, John Deere, Jungheinrich, and CNH Industrial. Since 2005, HAP has been part of the Hörmann Group, a company with a total of 25 subsidiaries and approximately 3,400 employees.

Press photo
Press photo
The beginning and end of the KNOLL assembly system at HAP: on the left in the foreground is the start station where the RFID tag is inscribed with the order. On the right is the removal station. Among other things, the monitor displays the sequence in which the truck cross members are loaded into the transport container. Pictures: KNOLL jpg (1 MB)

Press photo
Press photo
The assembly stand is fitted in the "supermarket." The employee can read from the monitor which components are required. jpg (1,012 KB)

Press photo
Press photo
The turning stations (in the background is the reworking station) have a straight-lug TS-G chain. jpg (1 MB)