Cooling lubricant cleaning in the spotlight

Cooling lubricant cleaning in the spotlight 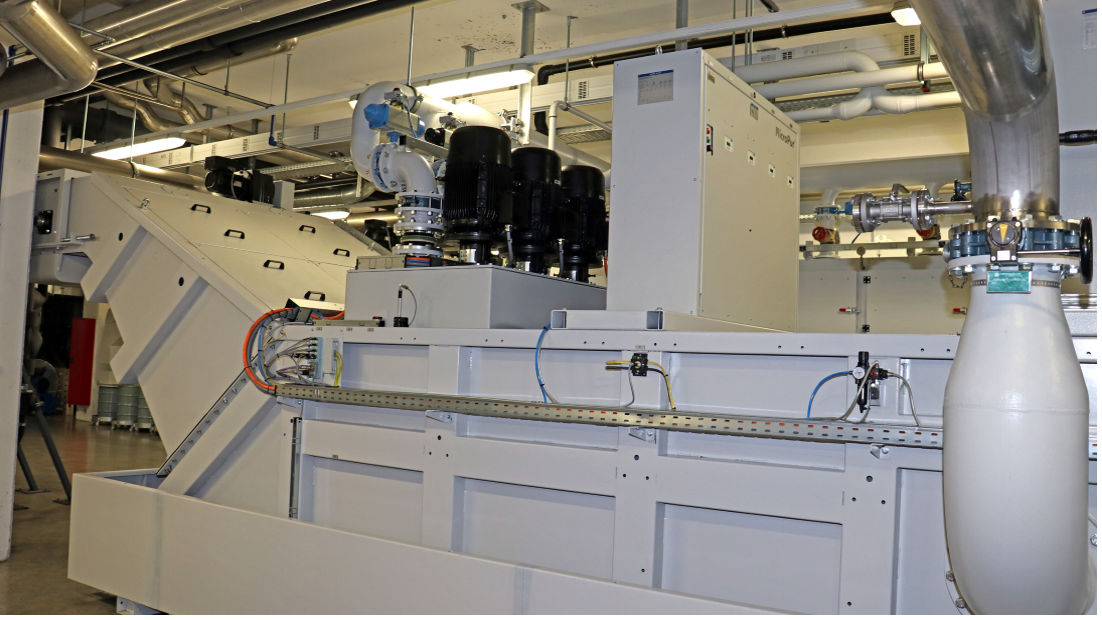 Ceratizit – around the world, the company's name is synonymous with demanding carbide material solutions. In the Austrian plant in Reutte (Tyrol), carbide metal is manufactured and processed into indexable inserts, rods, and shaped parts. "In order to improve the quality of our tools' cutting edges, seven years ago in the finishing process, we changed from diamond grinding disks with a particle size D46 to D25 and finer," explains Managing Director Peter Fink. He has been at the company for 16 years and is responsible, among other things, for all production at the location, where grinding processing of carbide metal is one of the most important processes.

However, the desired effect was not achieved in all cases. For the oil used as cooling lubricant when performing the amplitude grinding of the indexable inserts was dirtier than ever. The background: the filter media of the cooling lubricant system were no longer up to the task of the finer dirt particles. These concentrated in the oil and the filter media got stopped up early on. In order to guarantee the quality of the grinding results, a frequent filter exchange was required – something that is associated with high costs.

On the search for an appropriate filter solution, the production team led by Peter Fink discovered the MicroPur® superfine filter system from KNOLL Maschinenbau, Bad Saulgau at GrindTec 2012. They perceived the concept as promising, especially the achievable filter fineness of up to 1 µm; the backflushable, easy-to-change filter cartridges; compact design; and the possibility to operate the filter in full stream or bypass.

In order to be certain about the investment in new cooling lubricant cleaning, however, it was agreed that an extensive series of tests should be run. Wilko Stelzhammer, who is responsible for the machine tools at Ceratizit Austria, describes the process: "We attached test systems from KNOLL and four of its competitors to the bypass on our existing system for several months. With progressive use, most of the filters broke down with respect to concentration load and purity. Only the KNOLL MicroPur® could achieve the required values in the long run.“

In addition, the sludge concentrator integrated into the KNOLL filter was impressive; it reliably removed the sedimented grinding sludge from the system – something that is absolutely necessary for backflushable filters. However, clean, complete separation is not a given, as the Ceratizit employees knew from experience. Therefore, they were only convinced and ready to make the investment after on-site visits to comparable users. In 2013, they replaced the desludging device in the existing filter system with a KNOLL sludge concentrator. With this alone, after a few weeks there was a significant improvement with respect to the concentration of fine particles.

The filter system itself, whose capacity had been expanded just a year before, was still in operation two years later, before Ceratizit Austria converted the central oil cleaning for up to 70 amplitude grinding machines to KNOLL MicroPur®. Six filter modules (consisting of four filter housings with two filter cartridges apiece) ensure that 60,000 l of oil is cleaned in full stream. The delivery rate is currently 2400 l/min, but it can be expanded to 3200 l/min.

Oil is cleaner than when it was delivered

Peter Fink is enthusiastic: "This works brilliantly. Our oil is cleaner than when it was delivered. The filter fineness is now 1 µm, and the oil exhibits just 1 mg/l gravimetric residual dirt content, a value that was previously 100 mg/l. This purity makes itself noticeable not just in optimal processing results, it also helps us to save money in many ways." The Managing Director is referring to how the wear on machine bed guides and high-pressure pumps is now reduced to zero, while previously, repairs or replacements were required on a quarterly basis.

The purity of the oil and its great temperature constancy also make it possible to transfer spindle and control cabinet cooling to the central system. Therefore, there are no more procurement and operating costs for numerous individual cooling devices. In addition, their heat is no longer emitted into the hall air, where it previously required additional air conditioning in the summer.

The maintenance requirements for the central system are also lower, as Wilko Stelzhammer confirms: "The service life of the filter cartridges is more than one year. And when a replacement is required, it can be done in a few minutes." This is a clean process, for the carbide metal sludge is contained completely in the disposal drum. In the previous system, by contrast, there were numerous accumulations in the filter and basin that had to be removed manually.

Another advantage is the small space requirement. The KNOLL MicroPur® filters are so compact that the whole system requires only one-third of the previous space. Therefore, the specially designed room with its oil-proof bottom pan can be used not only for the filter system, but also as storage room for all other oils.

Today there is a close partnership between Ceratizit Austria and the Bad Saulgau filter specialists, one that is advancing the enhancement of the MicroPur®. The best example is the purchase of another KNOLL central system for cleaning an aqueous cooling lubricant solution. Ceratizit uses this for the centerless grinding and separation of carbide metal chips, where, according to Peter Fink, this demanding aqueous cooling lubricant medium is indispensable: "Water diverts the heat much better than oil, which degrades under the high pressure during centerless grinding. Since this is necessary for lapped grinding, we have to stick with water even if it's difficult to handle."

Such an aqueous solution is water with numerous additives. These ensure the appropriate lubrication behavior, rust protection, etc. and work against the release of heavy metals such as cobalt. But in contrast to oil, undesired microorganisms can spread in the water. The cleaning of the medium is especially important in order to protect employees' health.

Only for a long time, there were no technically and economically satisfactory filtration concepts for aqueous solutions. "Our first systems were precoat filters with diatomaceous earth, then with cellulose – both consumables were expensive to dispose of," reports Peter Fink. "In the end, we switched to backflushable gravel filters in order to recover the carbide metal – a valuable raw material." However, it was impossible to prevent the growth of microorganisms and fungi in the gravel, so that the gravel had to be changed every four years. With six filters with 5 t of gravel apiece, this was a lot of work and it was expensive too. For the dirty gravel with its carbide metal residues had to be transported to the hazardous waste depot.

This is why we were so pleased that KNOLL enhanced its MicroPur® filters for aqueous solutions. Karl-Rudolf Vogel, Team Manager of Product Development at KNOLL, explains: "While an oil/water emulsion cannot be finely filtered physically – it would have to be split up into its components – in principle, this is possible with an aqueous solution. However, due to the organic and chemical components, this is tricky." In extensive tests with various filter media and control-technical variants, KNOLL succeeded in equipping the MicroPur® with special filter cartridges and achieving a service life of approximately six months.

Enhancement based on partnership

In Summer 2017, the new KNOLL central system completely replaced the previous gravel filter. It consists of a combination of hydrocyclones for the coarse dirt and two MicroPur® filter modules for the fine particles in the water. Both units are currently used with a delivery rate of approximately 600 l/min in the bypass. Connected to the system are 25 centerless grinding and 15 separation machines, which require a cooling lubricant volume of 50,000 l. The delivery rate of the system is up to 3500 l/min; the sludge discharge is approximately 400 to 600 kg per week.

The basis of this decision was the trust between the partners and their firm conviction that the system's capacity and the service life of the filters could be improved further. The KNOLL development team headed by Karl-Rudolf Vogel therefore has nearly unlimited access to the system, to data and filter curves, which are transferred to the monitors in Bad Saulgau via remote maintenance. This way, various settings can be tested, the development of the parameters traced and analyzed, and improvements made.

Filter solution for grinding and eroding of carbide metal and ceramics

Two years ago, the carbide metal specialists in Reutte started up another special KNOLL system. Fitted with MicroPur® filters, it cleans a special oil that is not just used for grinding processes, but also for spark erosion. For in the production halls in question, Ceratizit uses state-of-the-art Agathon grinding machines that are equipped with patented PowerGrind technology. With this process, metallically bound diamond grinding layers are conditioned permanently with spark erosion.

The art of filtering this oil is keeping it conductive and extremely clean for the spark erosion – for in the end, carbide metal particles would cause an undesired excess of sparks. Here, the filter process is made more difficult on the one hand by the coking particles created by the spark erosion, and on the other hand, by the fact that the light chips from ground ceramic workpieces threaten to clog the filter early on. But here too, KNOLL has made great development efforts. Thanks to a new filter medium and a special control process, we have succeeded in reducing the gravimetric residual dirt content to 1 mg/l.

CERATIZIT – from pioneer to global player

Many companies are investing in state-of-the-art machine tools, but paying too little attention to the cooling lubricant. At Ceratizit in Reutte (Austria), this is not the case. With the awareness that high-quality grinding results can only be achieved with especially pure cooling lubricant, for carbide metal processing the company relies on central cleaning systems with microfiltration from KNOLL Maschinenbau – for grinding oils, and also for aqueous solutions.

Press photo
Press photo
A look into a production hall at Ceratizit Austria, where carbide metal indexable inserts are ground. The superfine cleaning of the grinding oil is indispensable for their high quality. Images: KNOLL jpg (1 MB)

Press photo
Press photo
An important component of the KNOLL filter systems is the integrated, automatic sludge concentrator, which ensures that the carbide metal sludge lands squarely in the disposal drum. jpg (638 KB)

Press photo
Press photo
From the left: Peter Fink and Wilko Stelzhammer (both of Ceratizit) rejoice with Karl-Rudolf Vogel (KNOLL) about the cleaned oil, which contains fewer dirt particles than when the oil was delivered. jpg (785 KB)

Press photo
Press photo
From the left: Wilko Stelzhammer and Peter Fink (both of Ceratizit) rejoice with Karl-Rudolf Vogel (KNOLL) about the cleaned oil, which contains fewer dirt particles than when the oil was delivered. jpg (1,020 KB)

Press photo
Press photo
With modern grinding machines – like the Agathon Evo Combi machine seen in this picture – the cooling lubricant must possess a wide variety of properties. In every case, the greatest purity is required. Picture: Agathon  jpg (639 KB)